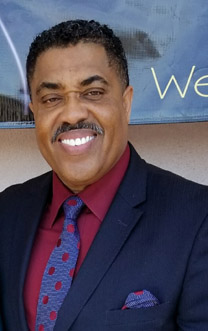 Pastor Freddie L. Parham, D. Min. is a man appointed by God to teach and pray for this generation. He is recognized as a Man of Faith with purpose and vision. Willing to stand and teach others to stand in the face of adversity. His anointing is powerful and the gifts of healing operate powerfully within the Ministry. Many will testify to receiving miracles and healings, through prayer cloths and the laying on of hands. There are documented healings that have taken place in this ministry. The cripple, blind, some in comas and all kinds of diseases have been healed. Barren women are now happy mothers.

Born March 12, 1960 in Scooba, Mississippi to James and Maggie Sue Parham, Pastor Parham is the third born of five children. In 1977, he joined the U.S. Army and served 13 years working as a top-secret computers and communications analyst. In 1984, while serving in Seoul Korea, he met and married Deatta Stewart. In 1985, they were reassigned to Presidio of San Francisco, CA, where they joined a local church and were appointed over numerous outreach ministries. In 1987, their Pastor commissioned and sent them out to begin a new ministry. Beginning in December 1990 through 1997, Pastor Parham left the military and began ministering in a local army base chapel.

In February 1997, Pastor Parham, along with his wife Deatta and some faithful members organized the Word of Faith Church. Incorporated in April of that year, they moved into their present location. The Word of Faith is a vital, thriving Church located in San Pablo, California. It offers numerous ministry outreach programs geared to serve the needs of people around the world.

Appalled by the defeated way most Christians live, Pastor Parham tackled the situation with sound Biblical teaching on faith, healing and prosperity. While ministering to the broken, he continues to lead faith and healing seminars and workshops.  He has preached and ministered in a number of countries, including Northern and Southern Ireland, Nepal, Kenya and Israel.

Integrated into the outreach, are programs that impart skills, counseling, and practical wisdom. This facilitates personal and spiritual growth in order equipping believers for the work of the Ministry. Pastor Parham’s ordained goal is to assist the saints in the transformation of their lives, developing them into anointed, healthy and prosperous men and women of God. Pastor Parham is presently ordained with Livingway Ministries and holds a Bachelor and Master degree in Theological Studies. In June 26, 2013 Pastor Parham was awarded his Doctor of Ministry (D.Min.) by the Southern Bible Institute & Seminary.  He was also awarded a Doctor of Philosophy in Leadership and Administration (Ph.D.) from Jesus College of Kathmandu International University August 15, 2015.